The site of the majestic Table Mountain is as welcoming today as it was to the first European setlers in 1652. Before the Dutch East India Company (VOC) established a 17th – century victualling station Table Bay’s pristine shore, the Cape Flats were hunted for game by the Khoi-Khoi and the San (Bushmen). The Portuguese sailor Dias, in 1488, called this ‘Cabo Tormentoso’, the Cape of Storms, which eventually became known as the Cape of Good Hope. With colonisation, the Cape of Good Hope established a tradition of hospitality leading weary explorers and sailors to rename it The Tavern of the Seas. The looming crags are a striking landmark providing a magnificent backdrop to the vibrant, friendly Mother City. Cape Town, with its extended seafront, underground mall and modern skyscrapers hold itself dear to its origins. Explore the many fascinating museums and historical buildings reflecting the cultures shaping the city and the province it serves.

Cape Town boasts a vast range of shopping styles and opportunities, from the haggling be
tween stallholders and shoppers at the Grand Parade and Greenmarket Square fleamarkets, to the smooth, hassle-free self-service at countless sophisticated and stylish malls. Many scenic wanders are within a day’s drive of the city centre. Magnificent seascapes and panoramic vistas abound.

At midday the noon gun booms out over Cape Town, startling the pigeons into a flurry of wings in Greenmarket Square, and old Cape Town residents glance at their watches to check the time. It’s a ritual that has lost its meaning in a world of digital watches and radio time-signals, but it is very much part of the changeless traditions of Cape Town, South Africa’s oldest and most beautiful city.

In more leisurely times, tramcors and hansom cabs carried passengers along Adderley Street. Today there are no rock-breaking convicts in the harbour to sigh with relief and straighten their aching backs at the noon-day lunch signal. But Cape Town without the noon gun would be unthinkable. Time was vitally important to the sea captains of old who called in at Table Bay in the days of the three-masted sailing ships. They relied on such time checks in order to adjust the chronometers necessary for navigation. As part of the service provided at the harbour, a ‘time ball’ was constructed on the hill above the
Table Bay Docks to signal the hour of one o’clock. It is still in action today. For the early European navigators to the Cape, there were no such services at all, of course. They sailed into Table Bay after months at sea, in desperate need of provisions such as fresh water and meat, and wood for their galley stores. They were met by small, yellow-skinned people who spoke in a strange, cricking manner and who were nicknamed hottentotten, meaning ‘the stutterers’, by the Dutch. These little people of the Cape traded cattle and sheep for iron knives, cooking pots and beads. After the establishment of the refreshment station at the Cape in 1652, voyagers also stocked up on supplies of Cape fruit and vegetables. And for more than three centuries, the Cape has continued to provide for the needs of visitors from all parts of the world, making it truly worthy of its title of ‘Tavern of the Seas’.

The early history of the Cape is lost, for the simple reason that the first inhabitants did not leave any records, the only clues to their existence being rock paintings which tell us little about them. Although archaeologists can piece together a picture of life at the Cape before European invasion, it is sketchy and, for the most part, inaccurate. This picture is of people ,who roamed the beaches – strandlopers – gathering food from the sea. There is also evidence of people inland who herded animals across large areas. They built nopermanent houses and set up no towns. The Cape was also inhabited by wild animals no longer found here today: lions, elephants, hippos, rhino and buffalo. All have long since vanished in the wake of what we like to call ‘civilisation’. 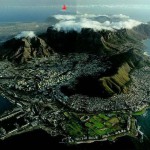 Developed And Maintained By Ashihara Online 2008 - 2020: © Shaantilodge | Design Theme by: